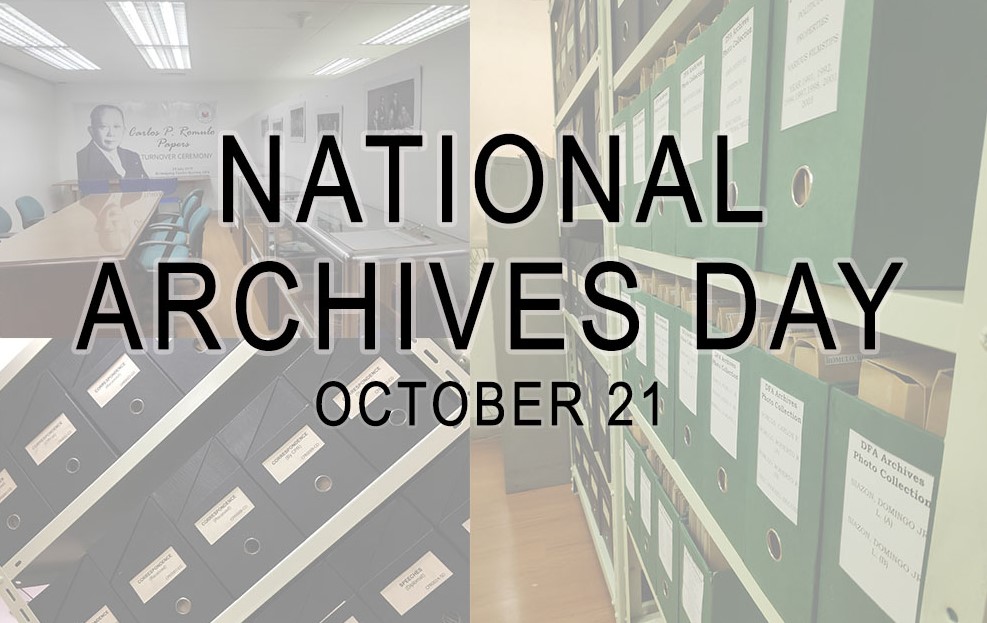 The annual observance of National Archives Day is observed on October 21. Public records and archives are kept, preserved, and made accessible to the public for research and study at the National Archives of the Philippines, the nation’s official repository. This day is commemorated as a result of Proclamation No. 660 of 1995 issued by former President Fidel V. Ramos. The Proclamation highlights the vital function that archives perform across a range of national development projects. The purpose of the day is to recognize archivists and the incredible work they undertake to preserve the archives.

The National Archives of the Philippines is home to over 60 million documents that span centuries of Spanish rule in the Philippines, as well as the American and Japanese occupations, and the years of the Republic. It also acts as the final repository for the great majority of notarized documents in the nation.

The Division of Archives of the Spanish Colonial Government served as the institution’s founding source (DAR). The majority of colonial documents were dispersed around the islands, especially in Catholic religious institutions. The US was given the Philippines by the Treaty of Paris in 1898, nevertheless. The American government took full custody of Philippine records on the islands and in Spain by the ninth provision of the treaty. Thus, the Archives Office was established. The Americans essentially appointed a “keeper of the Spanish Archive.” This was a crucial position due to the fact that various government agencies managed the Archives. It was incorporated into the Executive Bureau in 1901.

After World War II, the Archive was transferred from the National Library to the Department of General Services. By Executive Order No. 290, President Carlos Garcia created the Bureau of Records Management under the mentioned department in 1958. The agency participated in the coordination and preparation of government-wide plans for the retention and destruction of permanent or historical records. Three sections were also involved: Current Records, Archives, and Records Storage. The Archives Division has preserved and kept documents with long-term historical worth.

Inform people about the value of archives both online and offline. This teaches children how to safeguard any records or documents they may have and emphasizes the importance of preserving historical artifacts.

A unique and irreplaceable heritage that is passed down from one generation to the next is the archive. Archives must be treated from the beginning of time in order to guarantee that their value and significance are preserved. To find out more, search the archives in your nation.

You can discover how archivists safeguard significant historical data and papers. Archivists work hard to ensure that all audio-visual records are appropriately maintained in addition to documents and other records.

The Purpose of National Archives Day

Not only for governments and municipalities but also for businesses and organizations, the preservation of documents and archives is essential. They can highlight the value of maintaining archives on National Archives Day.

The National Archives of the Philippines is in charge of maintaining the archives as well as making sure the public can access the papers and records. This ensures that all records and documents are accessible to each and everyone without restriction.

The preservation of historical information sources, as well as the core components of cultural heritage and collective memory, is one of the organization’s main duties. The preservation of the people’s history, culture, and tradition depend greatly on this.

To raise their profile globally, record keeping and image building are done.

It draws attention to the uncommon, exceptional, and unheard-of documents that have been kept in archival facilities.

Raises awareness of the importance of records and archives among the general people.

Increases awareness of the significance of long-term archival preservation and accessibility among the general public, business community, and private sector.

Raises awareness of the significance of records management for efficient governance and development among key decision-makers.