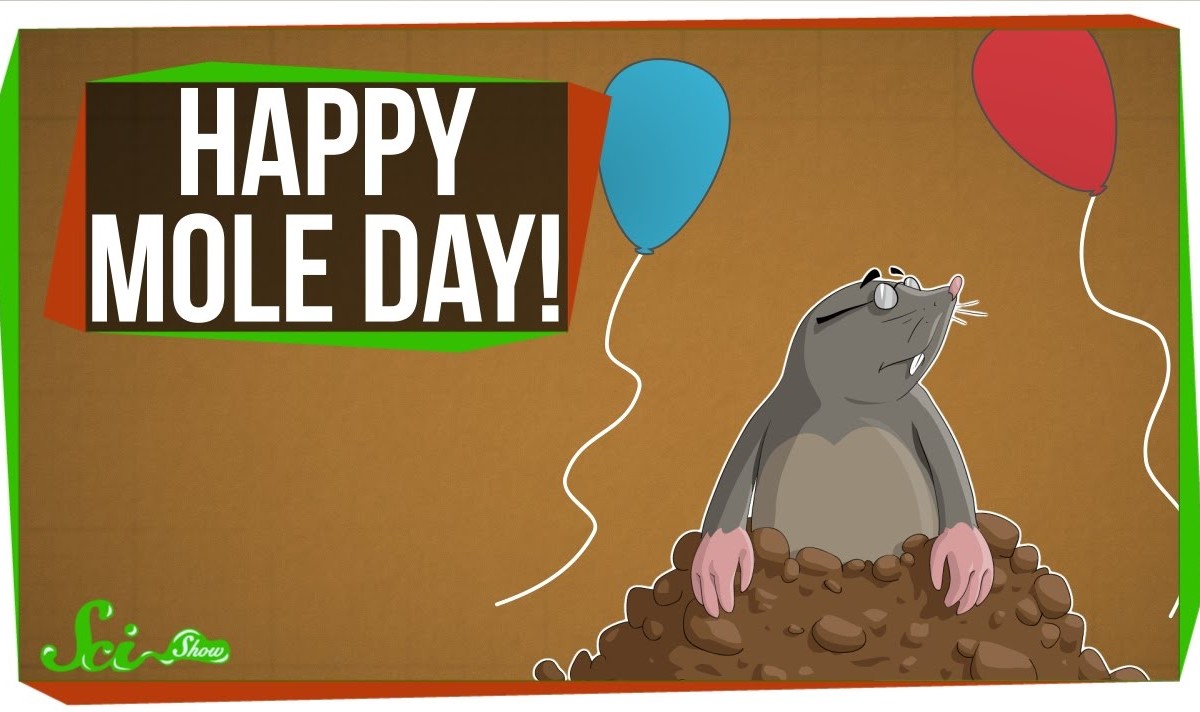 On October 23 between 6:02 a.m. and 6:02 p.m., Mole Day is an unofficial holiday celebrated by chemists, chemistry students, and chemistry aficionados; this makes the date 6:02 10/23 in the American way of writing dates. The Avogadro number, or about 6.021023, which represents the number of particles (atoms or molecules) in a mole (mol), one of the seven base SI units, is used to determine the time and date.

Early in the 1980s, a piece in The Science Teacher gave birth to Mole Day. The National Mole Day Foundation (NMDF) was established on May 15, 1991, by Prairie du Chien, Wisconsin, high school chemistry instructor Maurice Oehler, who was inspired by this article.

With a variety of activities frequently involving chemistry or moles, Mole Day is a popular high school event at many high schools across the United States, South Africa, Australia, and Canada. National Chemistry Week, which takes place from the Sunday through the Saturday of the week in which the 23rd of October falls, is sponsored by the American Chemical Society. Thus, Mole Day is a crucial component of National Chemistry Week.

The idea of Italian physicist Amadeo Avogadro is honored on National Mole Day. He was one of the notable inventors of physical chemistry, born in 1776, although his contributions weren’t fully recognized until fifty years after the formulation of his hypothesis and after his passing. He is well known for his “Avogadro’s Law” theory, which states that pressure and a constant temperature equal volumes of gases with the same number of molecules.

In “The Science Teacher,” a high school science teacher from the 1980s, she gave her justification for having a National Mole Day. A high school chemistry teacher named Maurice Oehler read this and was motivated. National Mole Day was conceived by him. Following this, the National Mole Day Foundation (NMDF) was established on May 15, 1991. News releases announcing the foundation’s opening were distributed to the media.

The goal was to increase the number of foundation members. These were mostly students or those with a general interest in chemistry, possibly chemists and teachers. Then, suggestions would be gathered from high school chemistry teachers, particularly those who were foundation members and observed National Mole Day, and would be put together into a newsletter that would be sent to foundation members. By 1992, the foundation was a non-profit organization in Wisconsin with a board of directors made up of nine people rather than a foundation.

The day, which coincides with National Chemistry Week, does a tremendous job of piquing kids’ interest in chemistry. Every year since 1991, the day has had a theme, such as “The Mole the Merrier” in 1991, “Molar Odyssey” in 2001, and “Animal Kingdom” in 2012. The day is often referred to as “Molem Memorial Day.”

It’s possible that Avogadro’s number will leave you perplexed because it’s so challenging. Read up on his theory and his life to get a deeper understanding of it. Learn about his clumsiness in the lab, his lack of support for the outcomes of his experiments, and how his eccentric and reclusive personality contributed to his lack of recognition throughout his lifetime.

Make up a mole tale

All students are encouraged to be creative during this break. Consider creating a brief play that reflects your perspective on National Mole Day. Make sure to include more jokes when you write stories, poems, or songs. Do not be embarrassed; there is plenty of mole comedy online. How many puns can you think of while performing this task?

Measure, guess, and solve the issue. Create desserts with moles, such as cookies, cakes, cupcakes, or brownies. Use mole measurements, such as 1 mole of sugar, if you’re feeling particularly clever. Do not forget that moles can be converted to grams.